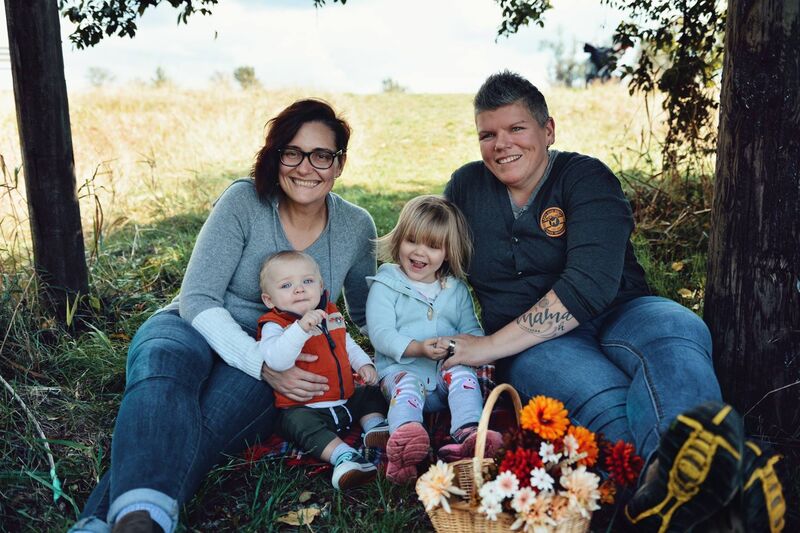 We had always talked about starting a family and the desire to have kids in our life, but we didn't really think seriously about it until late 2013. We got a referral from our Doctor to see Dr. Taylor at Olive Fertility Clinic. We didn't get in to see her until early 2014. It all seemed simple to us, we will find a donor, do some blood work, do an IUI and we will get pregnant, how complicated could it be? Fast track forward to May of 2015, thousands of dollars later, lots of tears shed, medication and blood tests galore, the emotional toll of it all and no baby after 6 IUI's. And to top it off, being told there is nothing wrong with me. We were emotionally done and not sure where or what to do next.

We were invited to a LGBTQ fertility meetup group run by Claire Benson-Mandl. She has had her own journey of fertility ups and downs and has a heart for fertility issues within the LGBTQ community. This was a turning point for us, as we were able to really see all of our options and though we had not ever taken IVF seriously we realized that it might be our only chance. Claire was a huge encouragement to us and was one of the main reasons we took this completely new road in our journey.

Olive was super supportive and agreed this would be the next best step for us. It was a big risk financially and emotionally and we knew this would be our last shot. I remember our intake meeting to talk about IVF, the cost, the needles, the process. We walked out of there and barely said anything to each other in the car as we were completely overwhelmed. We paid for the first amount of medication which was a huge cut to our finances and I had a bag of medicine and needles sitting behind me in the car with a very detailed schedule that had to be strictly followed.

After a few weeks of daily multiple needles and numerous scans and blood tests, we had our egg retrieval. We ended up with 11 eggs, and then with the daily calls of updates, we ended up having 6 fertilized embryos, 2 fresh ones would be implanted, and 4 would be frozen. The day arrived and 2 fresh embryos were implanted. Easy as it was, it was nothing compared to the 2 weeks we had to wait to find out if it worked. I was super emotional these 2 weeks, not sure if it was the pressure of what I was feeling or was I pregnant? On the day of our blood test we asked the nurse to call us at a specific time so we would both be together. I picked up my wife from work over the lunch hour and we sat terrified and emotional in the car waiting for the call. Jill called us promptly at 12:20 and with no indication in her voice at all she calmly said, "well you’re pregnant". I don't think we could talk, the build up of pressure and emotions had literally come to a boiling point. We both barely got any words out between Jill congratulating us and giving us more instruction, we were in complete disbelief and overjoyed all at the same time. A few blood tests later and 6 weeks in we saw a tiny heart beat. 9 months later, on April 21st, 2016 we welcomed our miracle daughter into our lives, Robson Grace Lillian. We could not have felt more blessed that day. She has been the best thing to ever happened to us and we cannot imagine life without her.

Because of my age, we didn’t want to waste too much time before trying again, since we had 4 frozen embryos. We did a frozen transfer of 2 embryos in Feb 2017 that ended with a negative result, and that hit us really hard. We thought we may only be destined for one child, whom we obviously loved, but it made us realize how much we wanted a second.

We decided to try our last try in March 2017 with our last 2 embryos. We hoped and prayed and agonized through those 2 weeks, but I am happy to say that it was successful, and our son Hudson Richard Ferris was born on December 4th, 2017.

This journey is not an easy one and definitely has its mix of devastating lows and unimaginable highs. Olive was an incredible source of encouragement through this whole journey and definitely made themselves available to us every step of the way. We also learned to ask questions - as many as you need to even if you’re repeating yourself. Support is also needed through this journey. We both had incredible work places that supported us through this whole process which was a huge blessing with all of the missed time we both had to take off. And having a few close friends who we could depend on through all of the lows and highs was so important to us and helped us through so much.

If we look back and think what would we have changed, we probably would have looked at IVF a lot sooner, but we also know this was the way our journey was meant to happen and we don't regret anything.